The man in the iron mask
(DVD Blu-ray combo disc) 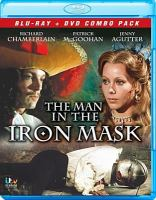