The butler : a witness to history
(Book) 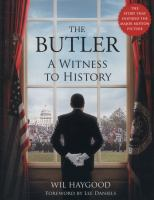 General Note
"The story that inspired the motion picture"--Dust jacket.
General Note
Includes an essay on the history of the portrayal of African Americans in motion pictures.
Bibliography
Includes bibliographical references (page 79).
Description
When acclaimed Washington Post writer Wil Haygood had an early hunch that Obama would win the 2008 election, he thought he'd highlight the singular moment by exploring the life of someone who had come of age when segregation was so widespread, so embedded in the culture, as to make the very thought of a black president inconceivable. He struck gold when he tracked down Eugene Allen, a butler who had served no fewer than eight presidents, from Harry Truman to Ronald Reagan.During his thirty-four years of service, Allen became what the Independent described as a "discreet stagehand who for three decades helped keep the show running in the most important political theatre of all." While serving tea and supervising buffets, Allen was also a witness to history as decisions about America's most momentous events were being made. Here he is at the White House while Kennedy contemplates the Cuban missile crisis: here he is again when Kennedy's widow returns from that fateful day in Dallas. Here he is when Johnson and his cabinet debate Vietnam, and here he is again when Ronald Reagan is finally forced to get tough on apartheid. Perhaps hitting closest to home was the civil rights legislation that was developed, often with passions flaring, right in front of his eyes even as his own community of neighbors, friends, and family were contending with Jim Crow America. With a foreword by the Academy Award-nominated director Lee Daniels, The Butler also includes an essay, in the vein of James Baldwin's jewel The Devil Finds Work, that explores the story of black images on celluloid and in Hollywood, and fifty-seven pictures of Eugene Allen, his family, the presidents he served, and the remarkable cast of the movie.